At present, the exact cause has not been determined, there are many studies demonstrating that diseased shrimp is classified by the group of Vibrio bacteria, as well as other studies showing that it is caused by a two-cell infection (Gregarine) or a parasite group called Vermiform. Some studies show that infected shrimp have the presence of various pathogens such as bacteria (the Vibrio group), parasites (Vermiform, the two-cell parasite – Gregarine), viruses.

Shrimps are excreted in white feces, sometimes the fecal filaments of shrimp are also pale yellow, the pancreatic liver is atrophic or soft, white fecal shrimp is often accompanied by soft-shell or loose-shell symptoms. A few days after the infection, the shrimp will be weak and swimming on the water, the shrimp will weaken and die. Simple tests should be performed to determine the exact cause of the disease for proper handling. The first and simplest thing to do is to check for parasites in the shrimp intestine by cutting a piece of shrimp intestine and performing an optical microscopy to see if there are parasites present. If the shrimp are not infected with parasites, check the total Vibrio bacteria in the pond environment, if the Vibrio density is too high, it may be caused by Vibrio bacteria. 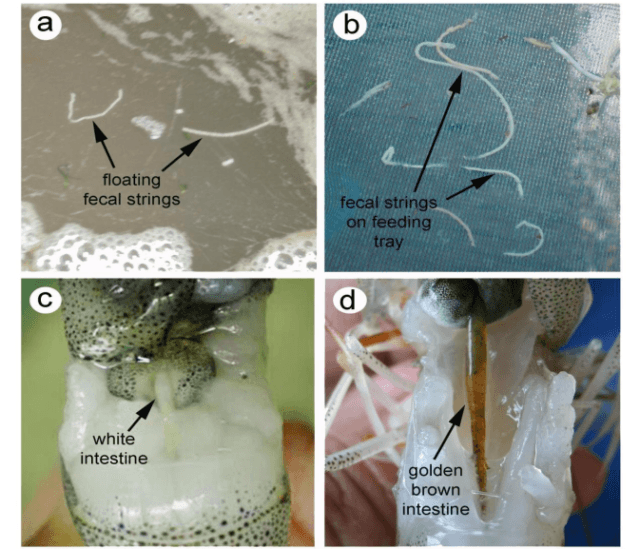 Apply general preventive measures because there are many pathogens causing white feces disease. According to the recommendations of Thai experts, shrimp farmers should reduce the stocking density in the hot season. This reduces the organic matter content in the pond bottom and reduces the growth of Vibrio spp. Besides, some shrimp farmers have succeeded in controlling this disease by using probiotics containing Bacillus subtilis to limit the growth of Vibrio spp. cause disease. Polyculture of shrimp with tilapia is also effective in controlling the growth of Vibrio bacteria in ponds. To control two-cell worms, use garlic at a dose of 5-10 g/kg of feed for high efficiency