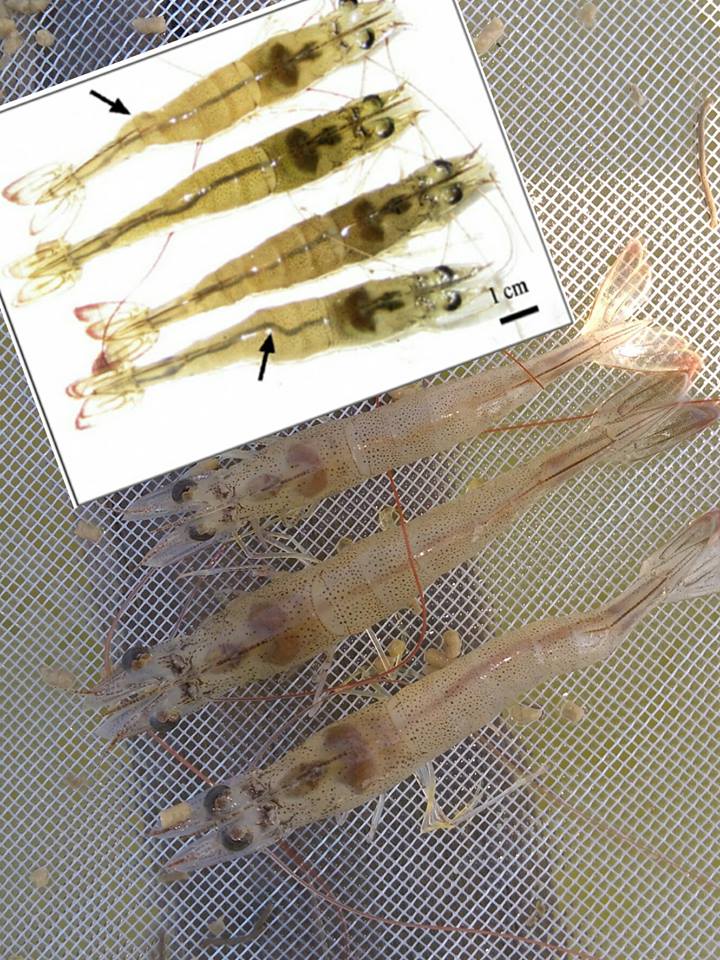 The findings suggest that ASDD in P. vannamei may be caused by a new virus that primarily invades neural tissue and results in neuromuscular dysfunction and abnormal morphology.

Shrimps with Abdominal segment deformity disease characterized by gross signs of deformed abdominal segments that were enlarged or twisted laterally and/or dorsoventrally and sometimes accompanied by opaque muscles.

This unsightly appearance caused economic loss of approximately 10% in affected specimens because they had to be peeled and breaded before being sold. Despite the distortion, shrimp growth and survival were unaffected and the majority of the shrimp tested negative by PCR and in situ hybridization for infectious hypodermal and hematopoietic necrosis virus (IHHNV), infectious myonecrosis virus (IMNV), P. vannamei nodavirus (PvNV), M. rosenbergii nodavirus (MrNV) and Taura syndrome virus (TSV).

However, by transmission electron microscopy (TEM), 20 – 22 nm, non-enveloped viral-like particles were observed in the cytoplasm of cells in affected muscles, connective tissue, gills and neural tissues leading to the proposal that ASDD might be a viral disease. Subsequent work revealed that ASDD was associated with a 4101 bp host genetic element (GenBank KC179708) that produced RNA transcripts. It was called NLRS because it contained reverse transcriptase and RNaseH domains similar to those of the pol gene of non-long terminal repeat (non-LTR) retrotransposons.

Use of a DIG-labeled NLRS probe revealed positive in situ hybridization reactions in the cytoplasm of abdominal-ganglion neurons of ASDD shrimp only. In addition, long-term use of female broodstock after eyestalk ablation in the hatchery increased the intensity of RT-PCR amplicons for NLRS and the prevalence of ASDD in mysis 3 offspring of those broodstock.

From 2004–2006, shrimp farmers in Thailand, Malaysia and Indonesia have complained of cultured whiteleg shrimp Penaeus vannamei that grow and survive normally but have abdominal segment deformity disease (ASDD)

The deformities visible in the larvae persisted upon further cultivation until shrimp harvest, but did not increase in prevalence and did not affect growth or survival. Thus, it was hypothesized that NLRS transcripts were upregulated by stress in long-used female broodstock and that this caused ASDD in their offspring by an unknown mechanism. Until the situation is clari- fi ed, it is recommended that immediate control measures for ASDD include avoidance of long-term broodstock use and employment of PCR screening to exclude broodstock that give positive reactions for NLRS. If the latter is not possible, it is recommended that the nested RT-PCR method developed for NLRS detection be used to exclude female broodstock that give 1-step RT-PCR reactions for NLRS. At the same time, it is recommended that breeding stocks of P. vannamei be screened for the possibility of identifying individuals free of NLRS.

The objective would be to eliminate NLRS from breeding stocks. Since publication of the work on NRLS, the frequency of ASDD reports in Thailand has dropped dramatically and it is possible that this is a result of breeding companies and hatcheries following these recommendations.