The causative agent is Picornavirus, belonging to the family Picornaviridae, the nucleus structure is RNA, the virus is spherical with 20 faces, 30-32 nm in diameter. The gene system (genome) is an RNA strand, 10.2kb in length, with a three-part capsid structure (55, 40 and 24 kD) and an extra polypeptide fragment (58kD). The virus parasitizes epithelial and subepithelial cells of the tail.

Pathological signs are similar to bacterial diseases. The acute form of the shrimp tail turns red and the chronic disease has many spots infected with melamine due to necrotic epidermis. Mortality appears to be related to the molting process. However, if live shrimp are able to peel, they usually recover to normal growth, even though they have persistent viral infections.

TSV disease has three distinct stages: acute, transitional, and chronic. The most obvious clinical sign, when L. vannamei shrimp is sick in the acute and transitional stages, it is lethargic (dying), the bulging tail turns red and necrotic, so shrimp farmers in Ecuador call it “red tail” disease When closely observed in the caudal epidermis (telson, swimming legs, …) under the microscope X10 showed signs of epidermal necrosis. Shrimps in the acute stage also show signs of soft shell, intestines without food. The acute phase affects the molting of shrimp. If the shrimp is larger than 1 g/head, the bird can see the comatose shrimp at the shoreline or on the pond surface. As a result, hundreds of seabirds feed in diseased shrimp ponds.

Although the disease lasts only a few days, signs of disease in shrimp in the transitional stage can be diagnosed. During the transition period with dark spots on the epidermis, shrimp may or may not show signs of tail swelling and red coloration.

Next, shrimp moved to the chronic stage, the virus was parasitic in the lymphoid tissue. TSV can be spread horizontally or can be transmitted vertically.

TSV usually infects ectodermal and dermal tissues. TSV infection in shrimp L. vannamei and P. stylirostris has three stages: acute, transitional and chronic. Epithelial epithelium is mostly affected in the acute stage, in the chronic stage of the disease only the lymphoid tissue is infected with the virus. Shrimp L. vannamei in the acute stage has a high mortality rate, most of the shrimp P. stylirostris are infected but they are resistant to TSV development. 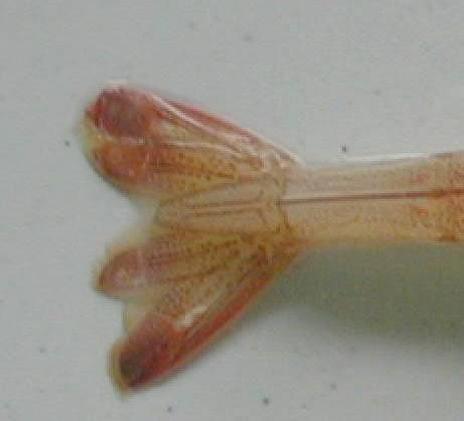 Epithelial or subepithelial tissues of infected cells are necrotic, and the cytoplasm is pink in color and contains dense or fragmented nuclei. The important feature is that the cytoplasm of the epidermis turns pink or pale green. What must be distinguished from yellowhead disease also has pink cytoplasm. However, distinguishing yellowhead disease, the ectodermal and dermal tissues can be inclusions and are always dark green. With TSV in convalescent or chronically ill shrimp, the melanin-infested area is found to be the site of recovery and healing of acutely ill shrimp.

Taura syndrome is a common disease in white-leg shrimp (L. vannamei = Penaeus vannamei) in the culture period from 14-40 days in ponds or in nursery tanks. TSV disease is common in small shrimp seed size 0.05-5.0g, larger shrimp may appear if the disease has not appeared in the early stages, the large seed stage or commercial shrimp can occur. TSV disease causes death from 40-90% in shrimp cultured from post, shrimp, and large shrimp. TSV can also infect Western Hemisphere shrimp (P. stylirostris, P. setiferus and P. schmitti) often causing death in the post or juvenile stage. In addition, some Western hemisphere shrimp (P. aztecus and P. duorarum) and Eastern hemisphere shrimp (P. chinensis, P. monodon and P. japonicus) can experimentally cause TSV infection.

In 1992, the disease appeared in L. vannamei shrimp cultured in Ecuador (June 1992), TSV disease developed very quickly throughout the shrimp farming area in the Americas, from post larvae to bloodstock. There have been brief reports of TSV in farmed shrimp species in the Western Hemisphere, the Americas, and Hawaii. TSV disease has occurred in farmed shrimp of the Pacific coast of the Americas from Peru to Mexico and the disease has also been found in wild whiteleg shrimp (L. vannamei). TSV has also been reported in shrimp farming areas from the Atlantic, Caribbean and Gulf of Mexico to the Americas. Taiwan had the first report of whiteleg shrimp (L. vannamei) imported from Central America that were infected with TSV up to 90% (Chien Tu et al., 1999). To date, TSV has spread to wild black tiger shrimp in China and some other Asian countries.
Table: Shrimp species infected with Taura (according to V.A.Graindorge & T.W.Flegel, 1999)