The results of a study showed that water quality parameters such as salinity, dissolved oxygen and temperature did not have much influence on LSS infection in L. vannamei but pH played a major role, pH increased in time of infection onset in ponds infected with LSS.

A recent report by Indian scientists: 4 bacterial species have been isolated from diseased shrimp samples: V. harveyi, V. alginolyticus, V. fluvialis and V. parahaemolyticus based on morphological characteristics and biochemical test. In this study, the scientists also found that mineral deficiency, poor water quality, poor management practices and association of Vibrio bacteria could be the cause of liquid shell syndrome in L. vannamei.

Shrimps are slow, lethargic, soft, mushy, and shelly, and eat poorly. The shell of the shrimp becomes severely damaged, there is a layer of glue on the surface, the shrimp does not molt for a long time, the bacteria cling to the outer layer. Hepatopancreas appeared melanin pigment and the liver atrophied and was smaller than normal shrimp. The intestines of diseased shrimp turn milky color. The gap between the muscle and the shell is clearly visible. 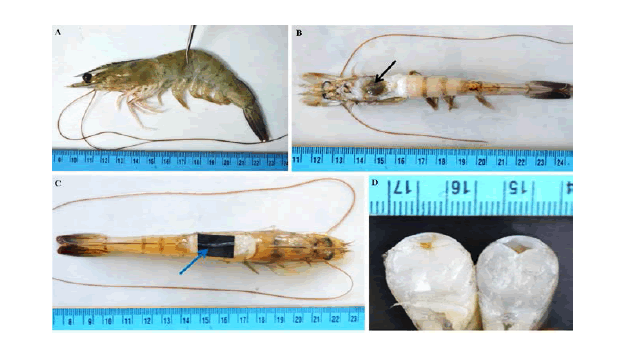 (A) Infected shrimp is slow, shell and muscles are soft, (B) Hepatopancreas of shrimp has melanin pigment, liver shrinks and is smaller when compared to healthy shrimp, (C) Intestinal color of diseased shrimp turns milky opaque, (D) The distance between the muscle and the shell is clearly visible.

Histopathological examination showed: hepatopancreas of infected shrimp, shrimp muscle and gills were completely damaged. Mud on the gills also occurs, reducing the respiration of shrimp. Symptoms in infected vannamei shrimp were similar to those of LSS-infected black tiger shrimp reported in 1989. 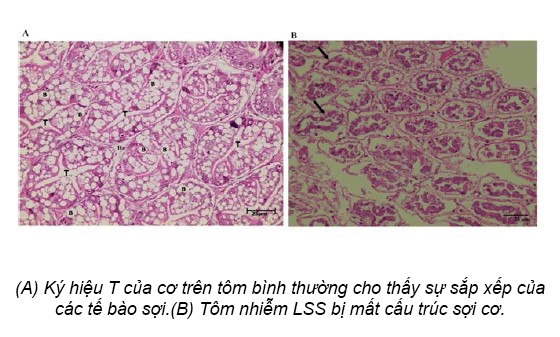 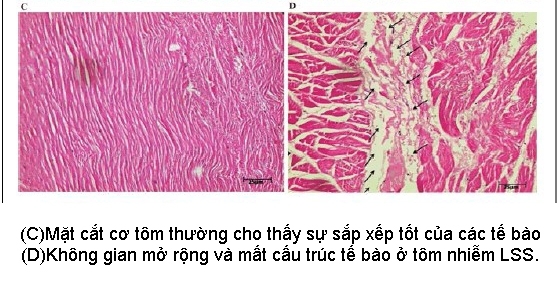 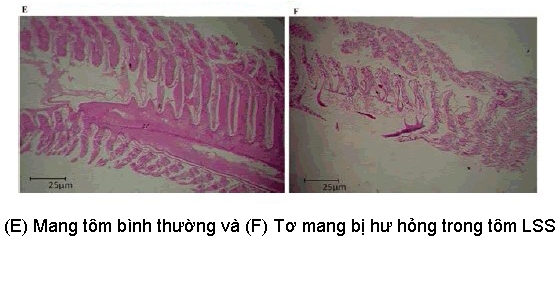 Affected shrimp have soft shells, the space between the muscle tissue and the shell and the hepatopancreas narrows. Loose shell syndrome has been reported in farmed black tiger shrimp (Penaeus monodon) since 1998 in India. Signs of weak shrimp feed conversion efficiency of shrimp significantly reduced, leading to poor meat quality and chronic diseases, causing heavy economic losses to the shrimp farming industry. The Society of Aquaculture Professionals (SAP) in 2002 recorded the prevalence of LSS in more than 50% of the farms in the coastal areas of Andhra Pradesh. But knowledge about loose shell syndrome on farmed vannamei shrimp is quite limited.

In the study, the tissue structure of normal and LSS-infected shrimp was compared, factors such as: water quality parameters, mean body weight (REXW) and daily growth rate (DGR). selected for study. Shrimp growth was monitored once/week from 35 days of culture.

The main cause of loose shell syndrome on white shrimp is due to the association of Vibrio bacteria, so scientists recommend general preventive measures for bacteria such as: Periodically disinfecting, managing water supply, supplying provide adequate minerals and enhance resistance for shrimps…