(VAN) On May 28, MARD and UNDP signed a project aiming to strengthen the resilience of smallholder agriculture against climate change-induced water in Central Highlands and the south-central regions. 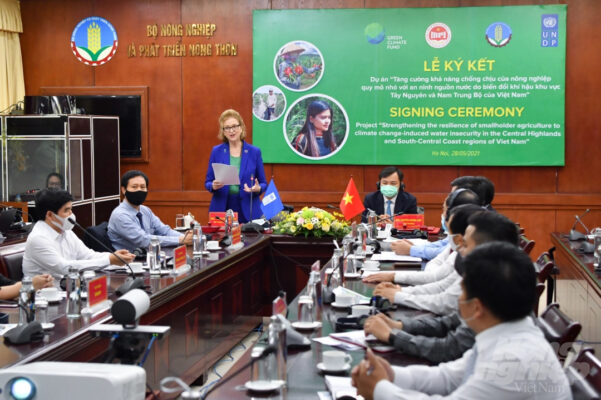 The project named “Strengthening the resilience of smallholder agriculture to climate change-induce water insecurity in the Central Highlands and South Central Coast regions of Vietnam.” and other documents were signed between Deputy Minister of Agriculture and Rural Development (MARD) Nguyen Hoang Hiep and Caitlin Wiesen, UNDP Resident Representative at Viet Nam.

This project utilizes and leverages the co-financing of US$126 million from the Asian Development Bank – ADB and the Government of Vietnam for irrigation infrastructure modernization.

Besides, the project also proves Vietnam and UNDP’s efforts on promoting financial connection and strengthening the effectiveness of investigation in the resilience against climate change. This is the third non-refunded project supported technically by the Green Climate Fund – GCF and UNDP.

It is coordinated by MARD and implemented by five related provinces including Dak Lak, Dak Nong, Binh Thuan, Ninh Thuan, and Khanh Hoa in the six years 2021-2026.

Thanks to the project, over 335,000 women and men benefit indirectly as they can gain more capacity through training and technical support, strengthen accessibility with information on climate risks as well as acknowledge more about smart agriculture adapting to climate change.

Hiep stressed that the non-refund aid with the total value of US$ 30.2 million is the largest of its kind over the past time. This is also an important project to increase the investment efficiency of the ADB project 8 (The Water Efficiency Improvement in Drought-Affected Provinces Project) implemented with a total investment of more than US$ 124 million. In which, ADB lends Vietnam US$ 100 million, the rest is reciprocal capital.

For her part, Wiesen said she was very proud to join the project signing as this is a project funded by the Green Climate Fund with a total investment of US$30 million.

The project aims to improve the resilience of smallholder agriculture to water security amidst climate change in High Central and the south-central regions. Particularly, women account for 50% of more than half a million people benefiting from the project.

“Project participants will benefit from smart agricultural models that use water efficiently. It can be said that this project will complement a larger project that the European Development Bank Asia – ADB is working in Vietnam, focusing on water infrastructure,” said UNDP Representative in Vietnam.

She also added that UNDP is conducting three projects funded by Green Climate Fund in Vietnam. In particular, the first project that has been implemented is to strengthen the resilience to climate change for communities on the Central Coast.

The second was the project just signed, supporting small-scale agricultural models against the risk of water induction due to climate change in the Central Highlands and South Central. Finally, there is a policy-related project, implemented by UNDP in collaboration with 5 Vietnamese ministries.

According to the UNDP assessment, Vietnam is a country vulnerable to climate change and has been affected by many climate change events to a more severe degree.

The Central Highlands and South Central Coast are expected to experience longer, more severe, and frequent droughts in the dry season and more severe floods in the rainy season. As a result, farmers must have faced a reduction in crop yields, which in turn affects food security and income.